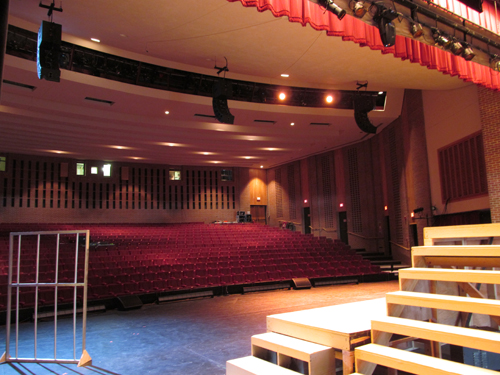 The Haverford School’s Centennial Hall is a theatrical facility which many colleges would envy. Its wide, fan shaped raked seating provides excellent sight lines to the stage from every seat, while its generous orchestra pit and broad stage complete with a full fly system make professional theatrical production possible.
Clear Sound was contacted to provide a complete audio and video solution for Centennial Hall. Our proposal for left /center /right hangs of JBL line array modules was accepted. Each of the three main speaker hangs has a VRX 915S base subwoofer module at the top of the fly, with five VRX 928 LA boxes suspended below it. The systems digital signal processing is BSS London, with Crown CTS amplifiers powering the loudspeakers. Two Community I2W8 2 way IBOX series loudspeakers are permanently mounted upstage of the proscenium for dance monitors. A versatile patching system allows four channels of Crown CTS 2000 amplifiers to be patched around the theater to feed six new Turbosound monitor wedges at strategic locations.
The facility’s existing wireless systems were repackaged in a portable rack, and the facility’s existing Presonus console is used as the front end. 32 new microphone inputs were installed in the pit and on the stage.  Access from the stage to the control booth was tricky so Clear Sound employed Aviom’s digital signal transmission system to get 32 channels of audio from the stage to the booth on a single CAT5 cable. The Aviom equipment at the booth end is mounted in the wireless rack, so when users want to take the mixer into the audience for plays the connection is a simple CAT5 connection into the wireless rack with an analog harness going to the console on top of the rack.
A stage manager announcement system using a Crown mixer / amplifier feeds the shop and dressing rooms backstage are outfitted with priority override attenuators.