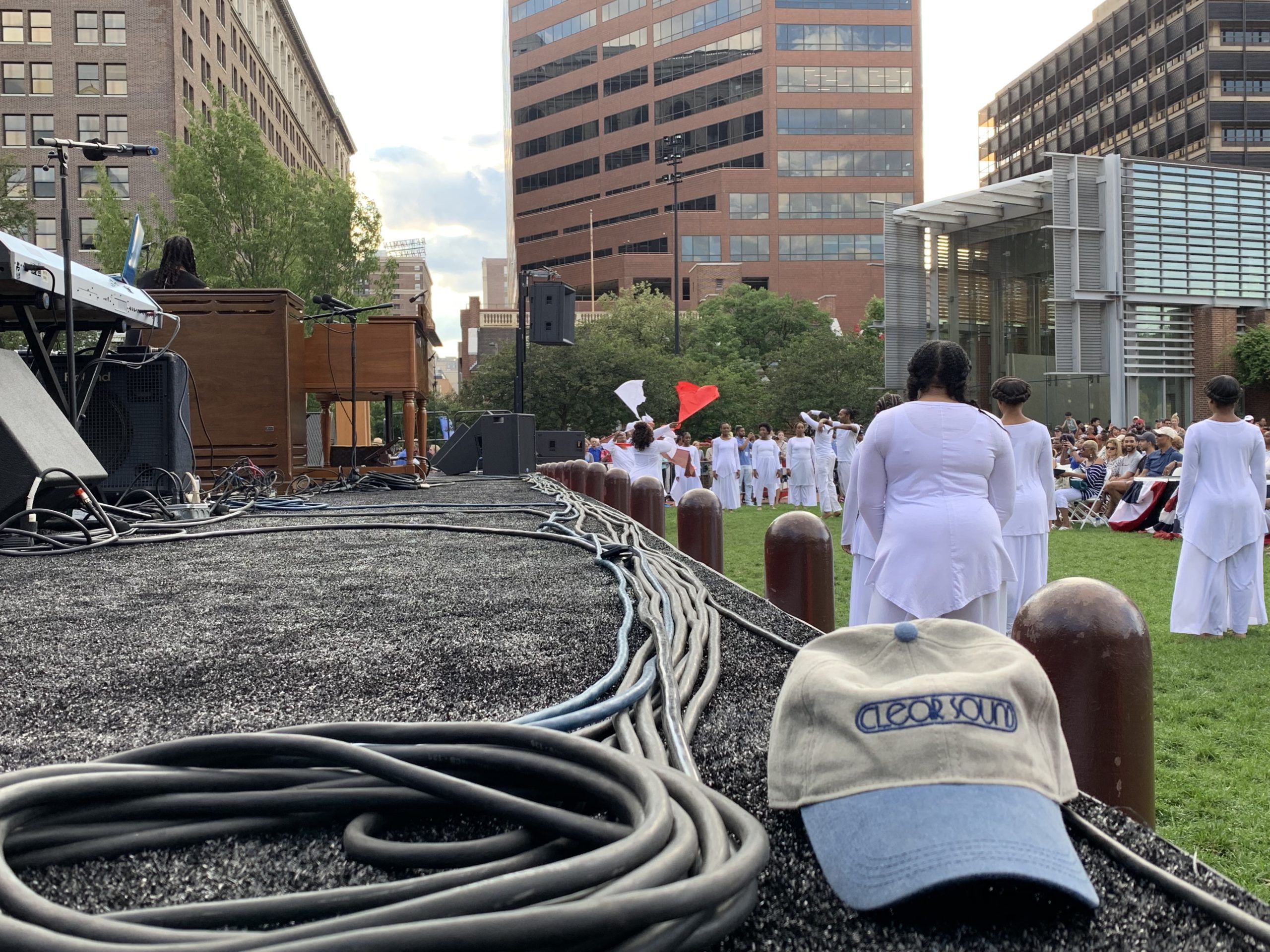 Finally, all that work pays off. The first event is usually the Gospel show. We’ll bring a scaled down crew to come in and get all the equipment back up and running, get the stage dressed and prepared and then load in the gospel band and their performers. We’ve had nearly 100 people on the stage when the whole choir got up there. We check all the microphones and run a few songs with them. Once everyone is happy with the sound both on stage and in the house we clear the stage and reset anything that got moved. We replace batteries in wireless units, clean the stage of any loose cables and get ready for the performance. After the event officially opens there are several announcements and speeches and then the gospel show begins.

When it’s done, we have an additional crew that comes in that night to help us change the stage and its decorations for the Pops show the next day. Traditionally we’ve put up a gigantic copy of the Declaration of Independence and state flags are secured around the stage while we move things around for the next show.

On July 3 we load in and test the Pops for their show that evening. Besides setting up and testing all the mics and instruments in the orchestra, we also coordinate with the media outlets present. Separate feeds are run for them and tests are conducted both on their end and ours. Because of the cameras, sometimes things need to move to get the best shots. Lights are checked again and just before sundown the show kicks off. As soon as that show is done, we do one last reset for the July 4 celebration the next day. Lots of equipment gets pulled down and packed away to give us a head start on the monumental load out, but some just has to be moved and reset for the morning show.

July 4 sees our show crew return just before dawn to get everything ready. We set and test mics for the band, move decorations into place and coordinate with the pyrotechnics crew. They usually need some power outlets dropped and some areas cordoned off for safety. They don’t launch any traditional explosives, as the nature of our space makes any kind of fire hazard completely unacceptable. Instead they position several streamer cans that are remotely triggered by the pyro crew. The effect at the end of the show is a dramatic red, white and blue spectacle that fits as a perfect punctuation for such a celebration.

After the parade goes by and we observe a moment of silence for the Sons of the Revolution the load out begins in earnest. All the flags are carefully rolled up and put in their leather pouches for next year. All cables are rolled up and mics are packed away. As soon as the deck is clear of all equipment the crew begins disassembling it and prepping it in piles for pickup. Teamsters use forklifts to move the piles into the trucks that are waiting in the correct order to take gear back to their respective shops. Two Clear Sound trucks come in to collect all the audio gear, two trucks come for all the lighting and the stage is packed onto a giant flatbed and secured for the trip home. It takes about six hours to completely strip the area of any sign of our presence. After the last truck drives away and the last teamster is signed out, our production manager thanks the various agencies that helped us put on the event and goes home.

About a month later we begin working on the next year!